1996 and newer. (98 from some Canada cars and newer) 1.6 Liter.
This 400 monitor, as it is called, runs only under specific conditions or not at all if it is suspended due to other ECU discovered failures.
You are here, via my EGR pages, due to 400s are driving you crazy or the Smog station the same.
Many folks, just ignore it and live a better life. (out side the federal air quality smog test ring maps)
The Car runs pretty well with 400s stored. (if the VSV2 is stuck closed, the test fails but EGR works prefectly, so 400s can be false If the VSV2 is bad)

There are 2 issues here.

The monitor runs everyday (mostly) but does only run 1 time per driving cycle ( key off, ends 1 cycle ) or it fails with P0400 every day or randomly.
The Smog Nazi’s stations:
The smog station will send you home, if any monitor is pending and not complete (that means you pulled the battery cables and then drove directly to the station, bad boy!)
You must drive until all DCT’s go out, and the CEL stops glowing running. and all pendings are complete (some states allow 1 pending to be, incomplete (too few)

My previous pages, tells you how it works and how to repair it, this page tells you how it actually functions in software.
I will attempt to detail what the monitor does, in greater details, than the FSM shows (weak as squat there..) {crossing fingers… now}
Yes, the monitor is pure software. (to a geek its Firmware, software in silicon, EPROM, PROM, ROM,OTP, or Flash. non the less permanent)

This software attempts, to test the EGR with out disturbing your driving experience, not easy to do. but they did it. (Test A is the most radical)
Normal operations:
By the way,when cruising, the EGR is on full time, off idle, and off WOT (wide, open, throttle) and engine must be HOT. and car must be MOVING. (96+)

I will now explain in simple human terms, how the monitor runs and what it expects, with limited science facts or exessive details…

You start your car.
The following must happen or the monitor will STALL (at Pending, seen in the full scan tool page 1), it will not even start until all the below logic becomes true.
Stall, refers to the monitor TEST. Stalling NOT THE ENGINE.
The engine must be viable and not bad, no dead cylinders or the like. No other DTCs but P0400. Correct and fix all other thrown (stored) DTC’s first.
It can be said, if your engine runs bad, has bad vacuum leaks ( EGR map just hates those) or the idle speed is out of control (spec) then P400s can trip falsely.
The EGR test IS A VACUUM test! MAP BARO SENSOR READING!
The engine not holding closed loop, at idle or cruise must be addressed first, after all, a lean bogging engine will exhibit odd vacuum readings.
The EFI sensors must not be dead or grossly bad. (EFI means, Electronic Fuel Injection)

The fuse for the ECU memory must NOT BE BLOWN. (ECU means engine controlling unit)
warning:
The car may in fact run perfect the EGR perfect at all times and the test fails and the stall test and live test passes, but because EGR CHECK VALVE is stuck the P0400s fail.
bench test this VSV valve carefully and make sure the vacuum routing is correct. (open hood, look up, behold a map)

Monitor A: (spec rules, not with my comments see tables below for my comentary)

The ECU commands the EGR to cycle and the checks the MAP sensor readings, very carefully.

Pass fail points:
Same as above!

If the monitors will not run, either you have a bad motor or bad sensors.

If one of the RED sensors are bad above, this monitor can STALL.
Bad MAP, VSS, CAS, ECT or Thermostat can make the EGR test fail or not run at all.

DTC clearing methods:
40 passing driving cycles. (warm up cycles, hot cycles do not count) must happen and then the DTC will clear automatically. ( nobody does this, reset it and do again)

You can at any time reset the ECU, but that only hides the failure and restarts all monitors from scratch. ALL not just EGR!

The smog man will not allow your car to pass, with more than 1 monitor running. (good luck picking which one runs, grin!)
Most states allow no pending monitors at all.
I do know folks that rest in the same location of the Smog station, then drive up and down the street until all have passed, then gets back in the smog line up.
The station operator looks at the CEL, if it is out, he commands it on, then off, (a test) (btw canada cars do not glow the CEL if the EGR fails, (in the FSM under EGR)
You drive slow clearing all monitors but the EGR, then drive in with an EGR pending, and in some states, this is ok. others fail.
Or you drive until all monitors pass, (closest to station you are) scan tool in you lap and the get in line, when EGR passes. (all monitors ended)
This is very difficult to pull off.
The CEL light is tested by the smog guy, you will never fool him! (secret scan tool commands he has…), and must be connected and not burned out.

False P0400s can be caused by ANYTHING that can upset the readings of the BARO MAP sensor.
Vacuum leaks?
Clogged Exhaust Catalyst exhaust Unit, melted.
Retarded Ignition timing.

If you have full OBD2 scan tool?, then access the freeze frame data.
This will tell you which of the 2 testes above failed and exactly the snap shot of all parameters pertaining to this failure.
Including the Baro readings.
A full scan tool, is the only way to find the really hard P0400 failures.
Not all fails can be solved by a simple cleaning of the exhaust path and valve seats.
Other cars?
96-98 sports 1.8L and 1999 and newer EGR

Test A:
The cruise test using the USA 96 and newer EGR Check valve (98+ in Canada? Canada uses USA cars and Canada cars, and is confusing…)
First, know that the Check valve, works even if the CAT back pressure is wrong, or the MOD VALVE and bits, are all bad.
The check valve has its own vacuum source direct from the PLENUM, and the details are here. (aka. as the EGR diagnostic valve) never used for normal driving.
The ECU opens the check valve and full vacuum is applied to the EGR main, gating it 100% full ON (digitally)
A Hot motor, 22 inches HG intake vacuum (that be light cruise)
Note, the very tight throttle change window! and the very very tight, steady throttle rules. Your right foot must not be wiggling in the least..37degr/seconds.
The engine speed can be changing a lot. 156 rpm per second,rate of change…
Light load (no hills) over 18 MPH.
The tests looks for 7 to 23mm vacuum changes. (7 is.27 inches HG and 23 is near 1 inch. HG ) both are tiny changes.
This below discription is very poor (IMO), I thank what it means is this, the “ECU looks at the pressure change open and closed”
If the pressure is the same (in both states)” then the valve is stuck open.” (the clue is the word LEAK below) yes, stuck open causes no changes, when asked to open.
To bad, the Freeze frame don’t show the before and after pressures..? moving on…
Now, knowing all that (sigh) how do I tell which test fails? with my scan tool freeze frame in front of me.? ( only real scan tools show this, a full scan tool not some $20 reader)
RPM? and road Speed? Sure,but “not in cut fuel mode” is the best clue. not in cut fuel mode is always test A.
(if the freeze shows, tiny injection P/W then it’s in cut fuel B test mode) (PW is injector Pulse width, below 3mS pulses?, are cut fuel mode.
If you want to lean what the cut fuel looks like then drive and log this data, with a full scan tool.
Watch what the injectors do, they cut fuel; and MAP goes to 200 mpg. (some cheap tools do not show the full freeze frame.. sadly) 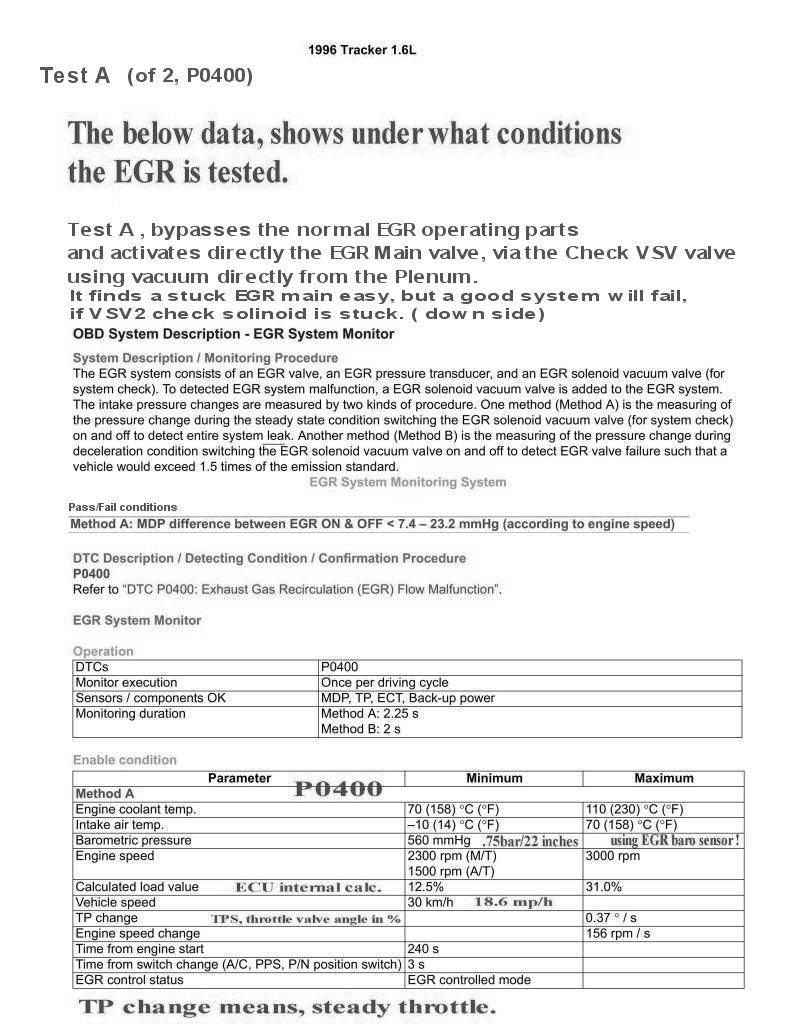 Test B:
The below test, is done at cruise speeds above about 30 mph, and high vacuum and hot engine, and you cut the throttle (more high vacuum) and then
The ecu opens the valve (EGR MAIN) and looks for a large vacuum change, as must as a 4 inches HG change,Engine RPM dicates the expected reading.
The freeze frame will have information that clues you to this test alone.(sadly it dont say test B fails) you must look at the freeze data.
Note the very strick rules for engine speed change and no minimum below but the 150 RPM/s means the RPM is dropping 400 times faster than the A test.
It may work better going down hill or and worse up hill. (up hill may cause the engine to slow down too fast) I recommend flat ground.. 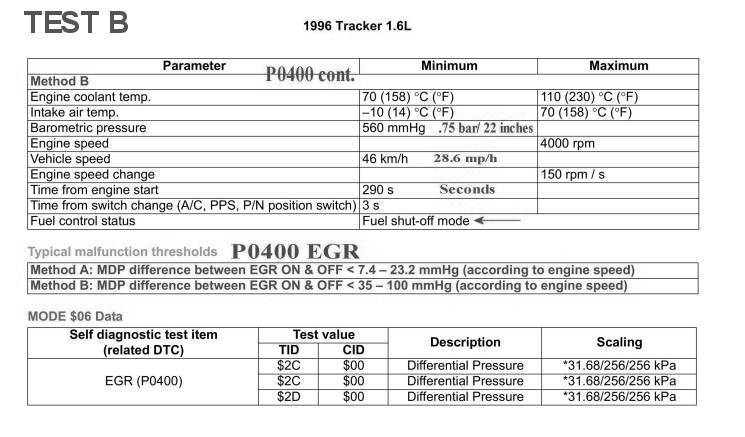 LINKS ON topic? ( hit home button above to go back to EGR main choice pages,for other years, or the 1.8L sport)
VSV means Vacuum Solenoid Valve.

VSV2 the diagnostic check valve, tests. (must open, must close and not leak)

The EGR Modulator (mod for short) valve test and all facts related.

EGR MAP TEST (they get dirty but usually never fail) The EGR map is just a Baro sensor.

VSV basic tests. All others.

The stall test, is just a test of the EGR main valve, you can press the diaphram in by hand or like this video, he applies vacuum to it, with a hand vacuum pump. a”mityvac”
Hear the RPM drop? to near 400 RPM and nearly stall, this only proves the exhaust path. (may pass, even though partially restricted)

The LIVE test, is in the FSM too, and work differently at the year, 95/96 year change over. Go back to main page and select you cars generation year type.
The live test, proves the whole system (electric, ECU,vacuum and the Exhaust path are working, the are ALIVE)

Almost all the parts can be tested on the bench.